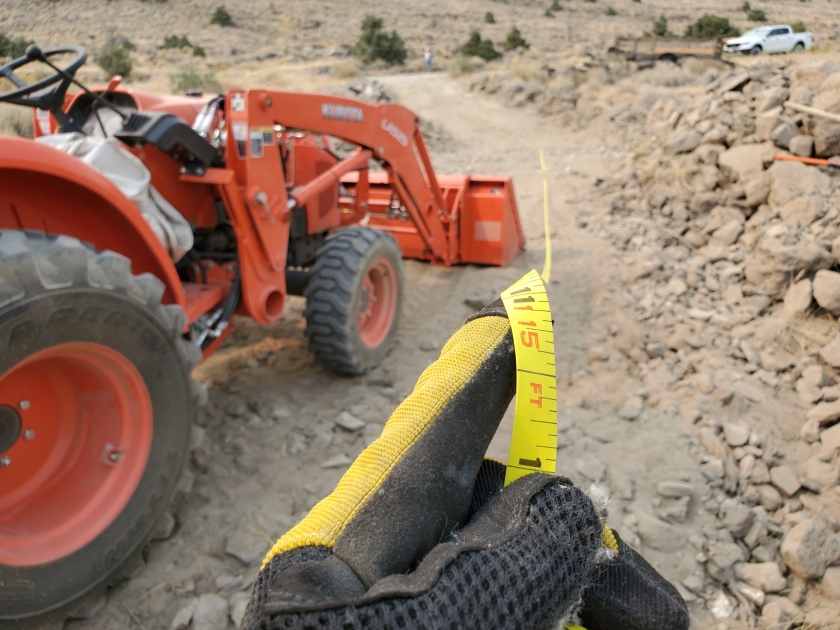 A tractor is not construction equipment, let’s just get that out of the way right now. Their primary purpose is for farms and agricultural use but at the same time a tractor is simply something that carries tools (or “implements”) around. The big bucket up front is called a front end loader (or “FEL”), and is on the front of 90% of tractors although you can put other things up there like a snowblower, pallet forks, and snow blades. Or nothing at all.

The back of a tractor has something called a three point hitch. As you might guess it is a hitch that connects to three points. So you can do simple things like just drag something about. But there’s also a PTO: power take off, which quite literally means you’re “taking power off” from the engine to do something else. This is different than the loader bucket up front (or the backhoe in the back) which is operated via hydraulic fluid pressure, via a hydraulic pump.

The PTO is a spinning shaft, driven by the engine. Combined, a three point hitch and PTO allow you to put things on the back that you can drag around and are powered. Some neat gadgets that can go onto the back of a tractor include:

Some tractors, like the Kubota pictured above, have native fittings for a backhoe in addition to the three point hitch / pto stuff, which makes things a lot more streamlined.

And some tractors even have a “third function“, which allows you to have another hydraulic thing going on. Like you have the built-in hydraulics that operate the FEL bucket up front, but let’s say you want another contraption up there that clamps down on whatever’s in the bucket: that’s a “third” function. I suppose the second one is stuff on the back but I really don’t know.

Off to Illinois We Went

Unfortunately for someone on the west coast, tractors just aren’t that common. As they’re primarily for agricultural use (the cool term is “ag”) locating a suitable model here in the Sierra is like scouting for a surfboard in Kansas. And when we say “tractor” one must remember that there are a few flavors.

So while there is a lot of farming in Nevada and the central valley of California it tends to be dominated by large ag who understandably have large tractors. Throw on a global pandemic to mess with supply chains and finding a quality used compact tractor is tough on the west coast.

The compact tractor was the sweet spot for me. Big enough to power some larger instruments like the BH77 backhoe, but right underneath the 30 horsepower threshold that bumps into Tier 4 emissions standards. Additionally I needed something that I could tow with my Ranger, I only have so much money, and I don’t really need to drag big things around. Interestingly enough the hydraulic flow rates on the 25HP and 39HP tractors (both compacts) is identical; those are driven via a hydraulic pump. Larger compact tractors let you drag more and since they weigh more they’re less prone to getting tossed about with heavy digging or FEL loads.

The reason I went with Kubota’s “L” series, rather than the smaller BX, is that the “L” is a no-frills tractor. With the BX you get things like more comfortable controls and a rubber foot deck. With the “L” you get a beefier more utilitarian tractor that’s designed for bigger jobs.

So no big deal we found one in Illinois. The kids and I hopped in the truck as the weekend started and an 8 day road trip ensued.

Towing a tractor back home

I learned a lot about Big Tex trailers. I learned about towing. I was never that good at backing down a trailer and still am not a pro but driving across the country and navigating hotel parking lots and gas stations will definitely give you a baptism by fire. Essentially you will hit everything or you will get better, or maybe both.

I ended up getting a Big Text 10ET-20 trailer and am pretty happy I did. The clearance is low so it’s tough on uneven terrain but on the highway with a big haul it’s a dream. The Ford OEM brake controller did a great job even in adaptive cruise control mode. I had never used chain binders before so that was pretty cool too. It brought me back to the days of hauling ground tackle about and there’s just something magical when working with lots of chain. I really mean that.

Anyone in construction who’s reading this is rolling their eyes at me right now for using a tractor in construction. Well, Mr. Cool Guy, it’s $1,000 each way for the rental of a mini ex or skidsteer in my area (plus the rental charge, that’s just delivery). And there’s a lot of projects I’d like to tackle that involve earth moving. A loader is not a skidsteer and a backhoe is not an excavator but used properly they will kick the ass of 20 guys with shovels all day long.

And remember all those tools that can make use of the PTO? Should you have every type of knife in your kitchen? Of course. Is it cheaper but possible if you have a very nice swiss army knife to a make dinner? Yeah, sort of. And that’s what it’s like doing construction with a tractor backhoe: yeah it works, sort of. But the key there is that it works.

But as a point of order I started with this:

And within about 5 hours of work ended up with this:

I’ve learned I can make about 10 feet per hour, transforming incredibly rocky soil into a 12 foot wide road passable by an AWD/4WD drive vehicle. I definitely feel like I’m getting better at operating the backhoe, learning to drag the teeth like a rake to break up soil and dislodge rocks, not just digging via bucket curl.

I’m gently back dragging with the loader bucket, remembering that it’s an FEL and not a skid steer. Given that I’m working with smaller rocks I’ve actually been considering building a pony version of a grizzly rock screen. Maybe just with welded rebar and chainlink across the top, when I’ve got a backhoe bucket full of soil and mixed rock it would be really handy to just dump the whole mess on a screen and have the dirt and smaller aggregate come out the bottom (road stuff) and have the larger lunchbox-sized rocks tumble off on their own (not stuff you want to drive over).

Right now any rock requiring “proper lifting technique” gets handled by the backhoe and I hop out and toss all the smaller ones by hand. A grizzly rock screen might help, or it might be more of a pain. Getting some exercise isn’t the worst thing in the world. But getting getting a chance to weld a rock screen would be the kind of terrific first welding job that a novice like me could tackle.

The actual job of operating the backhoe is akin to playing a video game. You have some control sticks and you start to learn how to move your little guy across the screen smoothly, not getting shot by enemy soldiers or eaten by angry turtles. I’ve learned that finesse matters a lot and similar to offroad driving you can hurt your equipment a lot less if you move a smidgen slower. Rather than swing the boom around at full speed and come to a crashing stop that rocks the whole tractor about, why not just slowly put it in position with a bit more delicacy?

Note: I know I haven’t addressed the whole “what are you doing this and where are you doing it?” line of questions. I’m not really ready to explain that at the moment but rest assured that for the seven readers of this website I’ll remember my commitment towards providing you with free entertainment via my life.

For now, it’s more earth work and having fun building something.